Thylacine may be extinct in the real world, as far as we know at least, but Australian studio Krome is keeping its legacy alive – in video game form.

Born in Brisbane, the developers of Ty the Tasmanian Tiger never thought they would be working on the same games for the second time.

TY the Tasmanian tiger is an Australian icon. If you’re new to TY, think Blinky Bill meets Crash Bandicoot meets Banjo Kazooie. It takes inspiration from all those classic 3D platformer games from the 90s with an added twist of the Australian outback.

It’s a game that the developers are credited with helping spread much of Australian culture and slang around the world and has now been remastered for a new generation.

9News caught up with Lindsay Parmenter, Head of Development at Krome Studios, and Creative Director of Games Steve Stamatiadis to tell them “G’Day” and find out how they brought TY back to life.

“We regularly receive ‘love letters’ about their childhood nostalgia and fond memories with the game,” Parmenter told 9News.

“It’s amazing to us that a small group of guys from Brisbane got together and created a game that is still enjoyed almost 20 years later.”

Not the first Australian export of its kind, hit children’s TV show Blue came from the same city.

“As Blue, TY is another creation from Brisbane, across the street actually, and full of all the Aussie stuff we grew up on, ”said Mr Stamatiadis.

The Australian feel and history of the game is unlike any other.

“Older Australians will no doubt recognize the references, from the more obvious like the dunnies and the footy, to the more specific tributes to Maurie Fields and Julius Sumner Miller,” Stamatiadis said.

Remastering an older game isn’t a straightforward process as Mr. Parmenter and Mr. Stamatiadis explain, but luckily for the studio, they still had the original development team from the original games.

“There was a lot of ‘I remember that’ and head in the hands of ‘What was I thinking?’ We were young and green back then, and the engine was our own technology, so we had all the pieces of code we needed for the rebuild, ”said Paramenter.

Mr. Stamatiadis said one of the big challenges is not having access to the original art and content of the game.

“We didn’t have all the art, which made it difficult. We found art in the TY2 backups, which helped. It was digital archeology,” Mr. Stamtiadmitted to 9News.

I still repainted tons of textures to increase the resolution, but life was easier when I had the source art files to use.

“We wanted to stay true to the original while refreshing it with the capabilities of modern consoles.”

“Thanks to the fans, we’ve added the ability to change TY’s appearance with all-new skins. There are loads of new graphic bells and whistles like color correction, bloom, and fully dynamic shadows.”

Mr Parmenter said that while they stay as true to the original game as possible, there are a few new things that players can expect when they pick it up for the first time.

“There is a new infrared effect, the game is now running at 60 frames per second, we have updated camera controls and advanced TY2’s bell wheel and other quality of life improvements.”

Mr Parmenter said there is also a new difficulty mode, “hardcore”, as well as trophies and achievements for the PlayStation and Xbox versions of the game.

Nintendo Switch players, if they choose, can use the motion controls on the Joy-Con controllers to launch boomerangs and soar through the air.

Mr Stamatiadis and Mr Parmenter said they were blown away by the support from the community around TY the Tasmanian tiger.

“After 20 years, we were delighted to see all the people who still love TY like us, and they showed up with their piggy banks to boot,” Mr. Stamatiadis said.

“The community is very supportive, and we listen to the fans, read their comments and their posts via email and on social media.

“In fact, we’re even making updates adding more improvements based on their feedback. Fans are critical with their feedback, and we appreciate them hugely.”

Ty the Tasmanian Tiger has released blockbuster 3D games such as Banjo Kazooie, Spyro the Dragon and Crash Bandicoot, Mr Stamatiadis said these ’90s platformer games were an inspiration to the development team .

“Almost the whole world was playing 3D character platforms in the late 90s,” he said.

“We were big fans too and we still love them. You can certainly see elements of these games in TY DNA.”

Mr Parmenter adds: “It’s fun to see someone who doesn’t know us or TY and denigrates him against Spyro, because Krome went on to create two new Spyro games – The Legend of Spyro: A New Beginning and The Legend. of Spyro: The Eternal Night. “

The developers say TY has had a huge influence on how the rest of the world views Australia.

“It got fans talking about animals and native culture. Fans are always talking about Australia being on their bucket list and looking forward to coming here someday, ”Mr Stamatiadis said.

“A fan told us he came to Melbourne because of TY and stayed!”

The team at Krome Studios are passionate about Australian wildlife and last month they organized a fundraiser for Save the Bilby Fund, in part a tribute to TY’s origin story.

“TY was raised by a Bilby family, and we wanted to help. The fans were like, ‘What? Are the bilbies real ?! “We brought Tassie’s tigers back to life with TY. We want to help keep the bilbies alive and not let them follow the Tasmanian tigers path,” Mr Parmenter said.

Looking back, Krome Studios have fond memories of bringing TY to life almost 20 years ago, including the moment in development when they realized it all fell into place.

“At first, early in development, nobody thought the game worked. It wasn’t fun yet. Then one night (it’s always late at night, isn’t it?) The turkey puzzle of brousse validated their code and the testers were checking the build. It was fun! Everyone wanted to try, and that was the night it all started to snap, “Parmenter said.

Mr Stamatiadis recalls sharing the game with publishers for the first time, telling 9News they initially didn’t realize how diverse Australia’s landscape is.

“I remember the editors kept asking for more Australians, and it was great, but then they said, ‘We should take the snow level down. There is no snow in Australia. ‘ Australia is a unique and amazing place. We are excited to share it with the world through TY the Tasmanian Tiger. ”

TY the Tasmanian Tiger HD is out now on PlayStation, Xbox, Nintendo Switch, and PC – a physical edition is also available in stores.

You can also now get a special physical edition of TY the Tasmanian Tiger 1 + 2 for Nintendo Switch at most game retailers.

If TY 1 and 2 make you want more, there are two more suites in the series available on PC. Who knows? Maybe we’ll see them coming to the consoles on the dirt road. 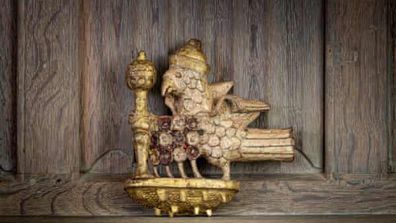 The wooden bird bought for $ 136 belonged to the former queen

The CEO of Take-Two believes his action ...